by fiend Thursday, March 18, 2010 Read
hosting review virpus vps
Thursday, March 18, 2010
So this is my review of Virpus VPS Hosting, as a principle i only review hosting companies AFTER i've been with them, as well as i try and be to the point with my review and it shouldn't be taken as a literal performance of the hosting company as a whole, just of my particular experience. 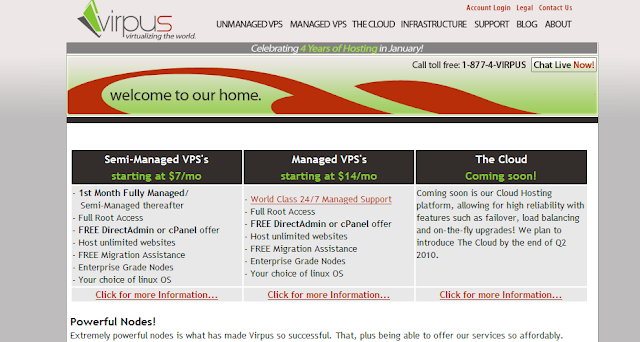 I was with Virpus for 5 months, and i signed with their unmanaged Advance package (so a mid to high end hosting package) with Directadmin, since the initial payment it took around 9 days to setup my account but after a contact with support they did apologized, they said that they had a huge surge of new customers and were a bit late on the setup as well as i was discounted for those days, so thats cool.

After the initial setup there were a couple of things that weren't setup right, especially since there were extra notes fields when you first signed up to put that kind of added or just needed information for a correct setup, but those seemed to be ignored (not a huge deal, since a lot of vps companies do this, probably cause the people that make the setup don't do any tinkering), so a few back and forth with support and everything is on track.

So the hosting comes with Directadmin hosting control panel, well its kinda a subpar hosting panel, but at least it has a low overhead (doesn't consume a lot of resources), that and probably a new server (although with not so new hardware) meant performance wise, the vps was quick and the first site i transferred over was indeed almost 2 seconds faster than on the other vps it was on.

After about a month later i transferred another site over, still the performance of both sites was pretty good, this lasted for 2 and a half months, since then i started having some downtime, for some apparently unknown reasons, others were to DDOS or Server Problems, so i had about 5 fairly large periods of downtime in the first 4 months, however in the last month i started having daily mini periods of downtime, i know i know, it can be a problem on my vps, but the vps was stable and apache has like 20 days of uptime i was using barely half the resources on the vps as well as the downtime was at random times, but still the sites started to drop off the internet for 5 or 10 minutes at a time (i use 3 different site monitoring services), i contacted support and nothing but excuses but nothing is done, so i moved one of my sites back to another vps, but the downtime continued for 2 more weeks, then again i contacted support and i was said they were going to scale this to management, i waited one more week and since i wasnt contaced by support or management and the trouble ticket in question was closed, i moved the last site to another new vps.

So like i always do, i go and read the terms of service (to see their cancellation policy and if i had to pay anything extra, but no, i was within my time to cancel and not have to pay anything) and so i asked for a cancellation, after that i didn't heard anything from support, not a "we have canceled your account" or anything (if my e-mail account or virpus account was hacked it seems it would be quick and easy to burn my vps), but what comes next wasn't that nice, although my due date for payment was more than a week from that time, after i canceled they immediately tried to make a payment to my credit card, as well as tried several more times the following week (i was lucky that the reason i didnt wait 1 or 2 more months with virpus, to see if the service would get better, was that i had to renew my credit card and i didn't feel like adding my new one to virpus...), so to sum it up my review of virpus:

Bad Points:
So i would say that i would recommend virpus to anyone that wanted a cheap vps for hosting anything that wasn't priority (hosting files, cache, image galleries, backups), it was quick and overall the downtime wasn't that bad (a month with about 20 downtime windows of about 5 to 15minutes each is bad for a active site, but not that terrible for file hosting or something like that, its still about 90% uptime), but i can't recommend them cause they did try and charge my credit card when they didn't have any reason to do it (for some companies you do have to pay something before you leave), so if you read this, there are way better and cheaper hosting companies on the web, so stay away from virpus.

Update: So a week as gone by and im still getting the "Invoice is Due" and that i should log in to my account and pay, nice ^_^ but since they closed my server and then closed my account, so even if i wanted to pay i was out, a little more of this and ill just consider it spam/phishing and start flagging them all as such.
Review of Virpus VPS Hosting