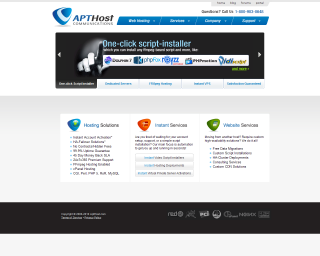 Well im doing reviews of host i've used, in this case it was Apthost Shared Hosting in mid 2009, sometimes when i finish a new site i decide to make a new account on a new host (cause they look good, or have a awesome promotion, and yes i know hosting promotions are more hype than substance, but you never know unless you try, thats why i continue to be a Dreamhost customer), so in this case i choose apthost, mostly because of their tag of being the best host for "FFmpeg".

So lets get into the review, the setup and payment was quick and easy as expected, my account was activated, and like normal quick upload and everything is looking good, i also requested a transfer of another one of my sites but that was a fail apparently apthost staff hasn't mastered transfer from cpanel to cpanel so i never did anyways, speed isnt awesome, but its all good, about a week later i noticed there were several error_log type files (some growing to multiple mb sizes) in a lot of the folders on the site, but the site seemed fine, when opening those, it was just standard log files with lots of weird errors (like page loads fine, but log reports errors from my ip anyways... weird), talked with support that dismissed it.

So like 3 weeks into it, the real problems started with multiple downtime's and overall pretty lousy performance (strange how this tends to happen to this kind of hosts, probably when they finish filling up the server to the brim...), since the site was new i decided to put a "maintenance page" while i try and workout the issues, so then it starts a week of trouble tickets with support and it kinda gets silly, most of the replies are "Your site is coming up fine.Please check it from your end." while the site is still down, also "It is being taken care of. I noticed that one of the techs did not show up, and left the monitoring of the server unattended, which caused to go into overload mode. It is coming back online in few minutes." or the "the account has been suspended for 30 minutes in our node due your account is responsible for overloading the server, which is impacting overall performance in the node.", so my site that wasnt even online is overloading the server... awesomeeee i kinda couldn't believe it, i know it was probably and automated system of some-kind and because the server was in the shitter that probably went to everyone on the server, still funny though

So after a week of practical downtime, they announce that they are moving me to a new server, ok... ohhh but there was a problem and the new server is built from backups that are from Friday and not Monday, what? well at this time since i was still on my 40th day (45 day money back guarantee) i asked for a refund and that was awarded after about a week,

So a recap of my review of Apthost: