by fiend Tuesday, April 27, 2010 Read
apache s2r server versions
Tuesday, April 27, 2010
Well i ordered a new box and found out that it was running Apache 2.0.63, a very stable version of Apache (still used by lots of webhosts), but since like a year ago, i've moved to the 2.2 branch, so to decide what was the best choice i decided to do some testing between both version to choose, humm performance wise?, and yes i know 2.2 is much better regarding speed, but performance is not just about speed, so i just installed one and then the other, did some tests and let it run for a full 24hours midweek (cause weekends the traffic drops a bit)

So what are the results, interestingly enough... im gonna make some charts ^_^ 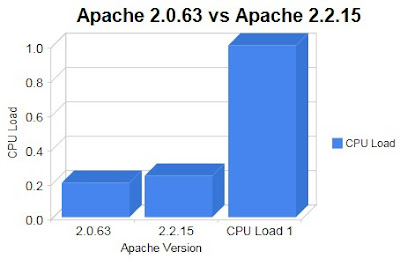 Average 24h Memory (Restricted to a total of 1GB) 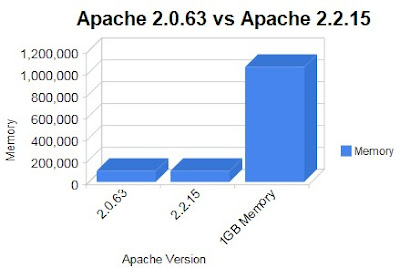 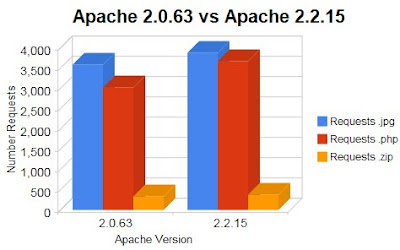 Ok charts are cute but were are the numbers? well there isnt a point or need really, since the site hosted (and test files) on the box are not a perfect benchmark of Apache's abilities, this should be considered above all a real world test, than a well measured test, but we can take a conclusion out of this, just looking at the charts, Apache 2.2 branch does seem to perform faster than the Apache 2.0 branch, although that performance increase is traded by a slightly higher cpu and memory consumption (about 0.3% memory increase and about a 6% CPU load increase ), hummm i can live with that,  2.2.15 WIN! hehehe, besides newer software has a tendency to bring better performance and security, and in the long run thats always smart thinking.
Choosing the right Apache? Apache 2.0 vs Apache 2.2