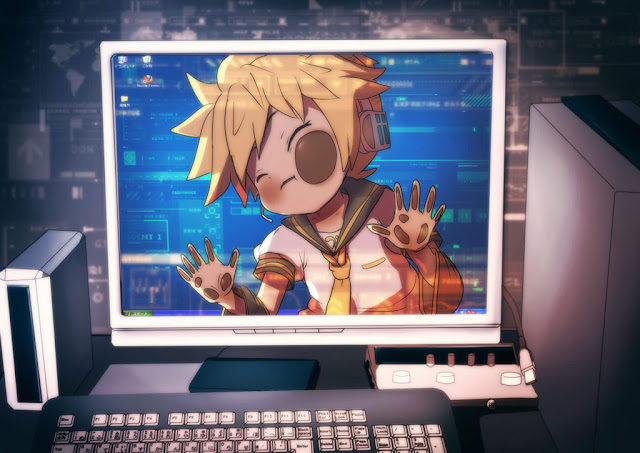 So I've been using LibreOffice on multiple computers on the office, as an obvious alternative to Microsoft's Office, now the reason for moving from OpenOffice to LibreOffice was purely because Oracle is probably the most untrustworthy company in the world (i joke, i joke, but they surely seem a very anti-opensource company), so with the spin-off LibreOffice and especially because they were joining with Go-oo, i thought the move to LibreOffice was the right one!

See my main concerns (and probably like most other users) with Office software are:


What i noticed first with my change to Libreoffice is that it was slightly slower than OpenOffice, i thought it was a bit strange since Go-oo was a bit faster than OpenOffice, still the difference dint seem much at the time and i put if off as the excuse from the LibreOffice camp that the focus right then was on code clean up.

So now that OpenOffice practically died off at the hands of Oracle and was handed down to the Apache foundation to try and become a more open source project again, i kinda would like to give it a go, at least to see how the performance is, so with OpenOffice 3.4 just coming out, lets make a comparison!

Well there are already a lot, especially on the LibreOffice side of things, but not all are for the better, sure LibreOffice has more tricks and features, but most are to my view (the view of someone that wants a basic office software for a business) mostly irrelevant, also Libreoffice color change is kinda obnoxious, who wants fluorescent green/blue/yellow documents icons? Besides that, i would say in basic office functions OpenOffice and LibreOffice are on par.


Office Compatibility between OpenOffice 3.4 and LibreOffice 3.5.3

Well almost the same, even tough here i kinda have to give a nudge to LibreOffice, since it has way less warnings and quiz options while opening Microsoft Office Documents, the OpenOffice "oh jesus christ i see a macro" warnings are a bit of a overkill and annoying, but yeah they both work pretty good with Microsoft Office documents.


Performance between OpenOffice 3.4 and LibreOffice 3.5.3


I'm using pretty modern computers (multiple core cpus, 4GB ram, fast 7200rpm hard drives), one with Windows XP the other with Windows 7, yes  I'm  not going to compare on the Mac or Linux cause  I'm  not using them on the business side, also although this isn't all that scientific,  I'm  going to take some precautions, my scheme will be installing/rebooting, running cold/running hot, also  I'm  not tweaking any of them for performance, this is out of the box performance, on both  I'm  only installing the writer/spreadsheet/presentation programs, on both  I'm  disabling quick start. 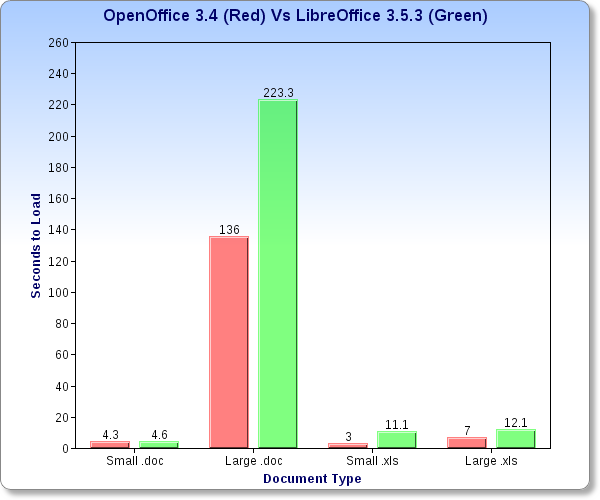 The small.doc is 40KB, the large.doc is 25MB with plenty of formatting and embedded images and graphs, the small.xls is 45KB and the large.xls is 4MB with 20 sheets lots of calculations and graphs.

Note: I've removed the cold start, since they both acted pretty much the same, if starting cold, it adds around 16 seconds whatever the document and whatever the software (that sucks on both software's). I also removed the Windows XP graphic cause it was kinda the same, although all a bit slower than on Windows 7, but that computer is also a bit slower than the Windows 7.

So as we can see, OpenOffice has better performance once warmed up, especially on the large.doc, the difference in opening is huge! Almost half the time to open, and with smaller files it also consistently outperformed LibreOffice, also OpenOffice was very responsive on the Large.doc, while LibreOffice kept hanging while i was scrolling or editing, also for the same document Libreoffice used 43MB of RAM, while OpenOffice used 35MB of RAM.

So now i'm not sure if i should move all my computers back to OpenOffice or if i should wait for LibreOffice 3.6 in a month's time, but i do hope that both distributions start focusing on performance, i think if OpenOffice keeps improving its performance like this, that it really doesn't matter the clean code and all the nice bells and whistles of LibreOffice, most business will make the decision on performance (literally the biggest reason to buy Microsoft Office is performance) to stay with OpenOffice or go back to it, just like me.

Note 1: Seems i should have published the documents i used in this comparison, sorry about that, my fault! but like i said in the comments they were random office documents, i promisse ill make a better comparison when LibreOffice 3.6 comes out!

Note 2: Also the Windows XP computer has Microsoft Office 2003 (the only office i have ever bought) and all of the files i tested open INSTANTLY! and in COLD START! even the huge 25MB file, although it seems in that one it only loads the first 6 pages, but scrolling down it keeps showing the rest pretty quickly and smoothly, soo i would add that in the performance department LibreOffice and OpenOffice have still a long Long LONG way to go, even in 2012 they are no comparison in performance to a 2003 software.
Apache OpenOffice 3.4 Vs LibreOffice 3.5.3