Review LibreOffice 3.6 Vs OpenOffice 3.4 Vs MsOffice Vs iWorks (on Win/Mac/Linux) 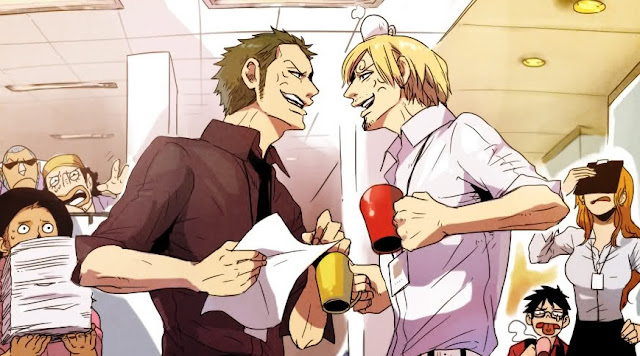 So there was a lot of confusion and some complaints about my previous faceoff OpenOffice vs LibreOffice, some stuff was deserved (not providing the test files was silly, but i did use office documents so i couldn't without messing with them), making a strange graph with strange values, not including the other operating systems even though the results were close, so I'm fixing all of this on this review, it will be simple and similar in point (comparison of performance for a small business office), because im doing this review as much for me as anyone else, in an office setting, were performance is the most important thing followed by a responsive layout and good formatting (stuff like compatibility or features are not as important since all of the software here has the features we want and used for years!).

This is the setup i will be using (and yes i wont be using my ssd powered hardware, because i dont have any at the office):
The files i will be using are (you can get them here):
Why no OpenDocument (.odf or .od) or Office Open XML (.docx or .xlsx)? Well cause 90% of our files are .xls or .doc and normally when we receive in any other format, we convert it to .xls or .doc (Office 2003 format), as well as LibreOffice 3.5 (what we are using now) can pretty much open any file-type, so i'm aiming to what we normally use.

For the software, all operating systems are up to date, i've disabled as much software as i can from all of them prior to the tests (that means, anti-virus, dropbox, etc), also on windows 7 im using Ms Office 2003 and on Mac im using Office 2008 and iWork 09, the reason being these are the only ones i own and its mostly for comparison purposes, all installations were on the typical settings and on Mac i did close the software every-time, so hot start was with the program fully closed.

Libreoffice and Openoffice need to do some tweaks on first run, so i did first runs with no files just to finish that, also for each cold start, the measurement is the time of the first run of the file (this time around, no averages!), time is as follows 1:15:30.45 (1 hour, 15 minutes, 30 seconds and 45 centiseconds), also only added the CPU on the large .doc because that was the only one that freaked out the Office's, on all the other files CPU dropped to 0 or very near it after loading.


Clear winner here is MsOffice 2003 blazes past LibreOffice 3.6 and OpenOffice 3.4, still its kinda weird that altough nitpicking, its OpenOffice that still nudges past LibreOffice and takes second place, and even on the large .doc where it took almost 1 more minute to load than LibreOffice it still was way more responsive after loading, while LibreOffice was hanging and lagging hard (using a full core) and it also crashed on shutting down.


First things first, the winner here is pretty much LibreOffice 3.6, still it seems to struggle hard on the large .doc, it hangs hard and has a hard time with it (although it opened the file surprisingly fast) the biggest loser here is iWork, since not only does it struggle to open files but between all the Office's it was the only one that had bad formatting, MsOffice 2008 was good enough on everything. 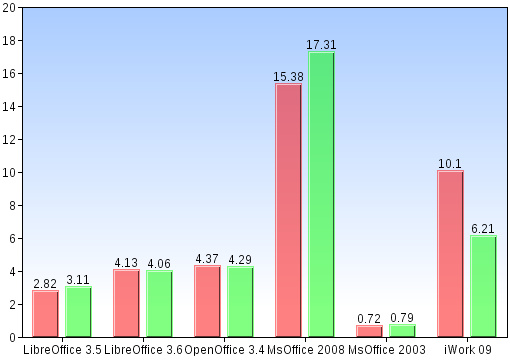 Here is a quick chart of best performance (with whatever operating system works best) for the small .xls and .doc, what we get here is that if you want best performance it depends a lot on the operating system, for Windows 7, MsOffice 2003 blows past the competition, its by far the best, i actually even enjoy the "lazy loading" that it does with the large .doc where it doesn't load it all at once but opens pretty fast, besides that OpenOffice 3.4 kinda still works best than LibreOffice 3.6.

For Mac your choice is LibreOffice 3.6, it works like a charm, next up would probably be MSOffice 2008 just cause it has good compatibility and kinda treats all files equaly, but overall Mac OSX 10.6 is pretty disappointing for Office Performance with nothing loading faster than 10 seconds.

For Linux (Ubuntu 12.04), apparently LibreOffice 3.5 is freaking king, still OpenOffice 3.4 and LibreOffice 3.6 run pretty good too, they feel native and run almost like MSOffice 2003 on Windows 7, super fast and slick i barely see the annoying splash screen (ie any application that has a splash screen just means its going to be slow)!!!, i also like to point out that I'm using the same computer for Windows 7 and Ubuntu 12.04, so yeah great performance for all.

As a side note, in my office its all Win7 machines, mostly cause some of the software, like accounting software is windows only and there are no alternatives, so using another operating system would be troublesome even if doable (virtual machines and such), but this performance on Linux does give me pause, especially with how Linux nowadays does play fairly well with windows networks and windows computers, and with LibreOffice and OpenOffice seem to fairly stagnated in performance on Windows, going for Linux might just do the trick.
Review LibreOffice 3.6 Vs OpenOffice 3.4 Vs MsOffice Vs iWorks (on Win/Mac/Linux)